Disneyland Around The World 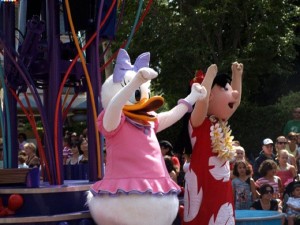 Walt Disney has created Disneyland as he visualizes a place where children and parents both can enjoy together by immersing in the rich atmosphere of storytelling and much more. Now there are 11 theme parks around the world.

There are 11 theme parks in 11 locations worldwide which runs by Disney. Apart from these theme parks Disney also owns the Disney Cruise Line (started in 1998, the Disney Vacation Club (started in 1991), Adventures by Disney (started in 2005), the World of Disney stores (from 1996) at 3 places namely New York, Orlando and Anaheim as well as the Walt Disney Imagineering (founded in 1952) and is the think tank and developer behind all Disney parks, resorts and attractions.

Here is the list of all the locations of Disneyland around the globe:

This is the first and original Disneyland resort consists of 2 theme parks namely Disneyland Park and Disney’s California Adventure. The whole Disneyland in Anaheim is extended in 510 acres and employs about 20, 000 cast members.

Adventureland: It highlights different tropical jungles from around the world in its famous Jungle Cruise boat ride. On this ride you pass several animated animals and other scenes.

Critter Country: it features the feel of the mountain forests of America. The most famous highlights in Critter Country are the Splash Mountain which has a high-speed water ride.

Disney’s California Adventure Park: You will enter in to this park through a replica of the Golden Gate Bridge. Main highlights are the Paradise Pier, the Golden State, and the Hollywood Pictures Backlot.

Fantasyland: It is located in the heart of the Disneyland. Here you will find you most famous Disney characters in the lively form such as Snow White and the Seven Dwarfs, Mickey Mouse and Alice in wonderlands, and so on.

Mickey’s Toontown: This toontown of Mickey features Roger Rabbit’s Car Toon Spin and the Gadget’s Go-Coaster especially for the kids. However, it also attracts adults too.

Tomorrowland: This is built to depict the vision of the future. The views of Tomorrowland updated from time to time.

Downtown Disney: It consists of a shopping area, dining and other entertainments.

It features the largest Disney resort of the world. It is expanded in 25,000 acres land situated near Orlando. There are 4 theme parks in Orlando Disneyworld.

Epcot: This theme park is expanded in about 300 acres. The major highlight is the future world. There is a World Showcase area if you are entering from the main gate of the Epcot themed park. It features the collection of various shops, attractions as well as restaurants which offers cuisines from 11 countries.

Disney’s Hollywood Studios: It features behind-the-scenes sight of Hollywood actions along with various thrilling attractions, backstage tours and other events.

Disney’s Animal Kingdom: It is home for over 1,700 animals scattered in 500 acres of flourishing landscape. It is the largest animal themed park in the world.

The Hong Kong Disneyland has opened in 2005. It is one of the smallest Disneyland of all. It is located in the Lantau Island and it takes around 20 minutes to reach from the Hong Kong International Airport.

Main street:  The main highlights of the main street themed park are ride on the vintage cars, Disney characters come live on the main street, and the parade where the characters like Mickey, Cinderella, Mermaid and others performs.

Fantasyland: The Mickey’s PhilarMagic which is an adventurous 3D movie that you can see here. One of the most favorite among these is the adventures at the Winnie the Pooh. And taking a ride on a flying Elephant will take you to the magistic flight over the Magic Kingdom.

Tomorrowland: Tomorrowland is one the most famous attractions in the Hong Kong Disneyland. This tomorrowland is filled with colorful robots, and unique rocket ships, floating planets.

There are 5 themed parks inside the Disneyland resort Paris. It is the first European resort expands in 4,800 acres in Paris. There are 2 parks namely Disneyland Park and Walt Disney Studios Park.

It was the first Disney resort built outside the United States in the year 1983. There are 2 parks in Tokyo Disney Resort namely the Tokyo Disneyland and Tokyo Disney Sea. It expands in 494 acres.

There are 7 themed parks built in the Tokyo Disney Resort and they are Critter country, Fantasyland, Toontown, Adventureland, Westernland, Tomorrowland, and World bazaar.

Critter Country: It features small animals from the Disney film “Song of the south”.

Fantasyland: Here you can take part in the adventures of Pinocchio, Peter pan, and Snow White. These are the classic Disney animated films characters.

Toontown: It is one of the colorful town where the live Disney characters live, play and work. It is amazing.

Adventureland:  It features the vibrant market places of Latin America, glimpse of the Caribbean, the Jungles and the grasslands of Africa, as well the tropics of Asia and Polynesia.

World Bazaar: As the name suggests, this is the doorway area of the park which has restaurants, shops, and bank. All these building designs recalls of a small American town from the early 1900’s.

Tomorrowland: It offers adventures like rocketing through the galaxy, touring of the stars, basically the combination of the science and imagination.

Westernland: This theme park shows Big Thunder Mountain, an encounter with a cowboy, cancan dancers, and gold miners of the Old West.