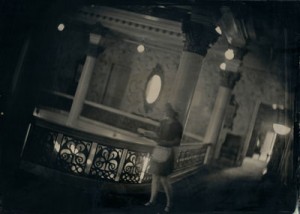 Few rooms in this historic hotel are haunted. It is being said that the ghost of Michael bang on this wall, turn lights and television switch on and off. Michael was the Irish stonemason, who fell from the roof of the hotel during its construction. Room number 202 and 424 are also haunted. The ghost of Dr. Norman Baker who was running the controversial hospital and health resort also wanders outside the Recreation Room. Even a nurse who is dressed in a white uniform is seen on the 3rd floor. And ghost of a woman in the room number 419 introduces self as a cancer patient to the hotel guests and keepers and then simply vanishes.

Leone Jensen, a 22 year old girl died of jumping from the roof of 7 stories Hotel San Carlos on May 7, 1928.  The ghost of Leone can be seen in the hotel in an evening gown as if she was ready for dancing. She died because of the lost love of a bell boy of the close by hotel. Even after so many years her spirit remains at this hotel. Guests and the hotel workers reports about the haunting noises, weird breezes, as well as the white cloud of a female figure in the hotel.

One of the many legendry people who stayed in this hotel was Stephen King. He stayed in room no. 217. He had written half of “The Shining” here in this room after getting inspired by the hotel. Room number 418 is also reported to be very active in the ghostly activity. Sound of children playing is also very common and can be heard from the halls, even when there are no children there.

When the Hotel Landmark Inn first opened in the year 1930, a librarian on the shores of Lake Superior fell in love with a sailor. The sailor had to make only one last journey with his crew in his ship before coming back to marry her. Unfortunately, the ship and crew never come back. It is said that the spirit of the librarian still appear in the Lilac Room. The Lilac Room has a Lake Superior view and it is believed that she is still watching for the return of her sailor.

It is being said that during the construction of this hotel in the year 1930, one laborer was being killed and his body was never being found. There is a report that “The Lady in Green” being seen in the Mezzanine level and in the Hall of Mirror who is believed to be the widow of that construction worker. The spirit of his widow is still searching for his body.

This entry was posted in Hotels and Resorts and tagged Hotels, Resort. Bookmark the permalink.