5 Most Beautiful Landmarks of USA 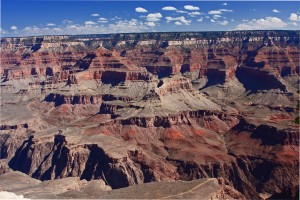 Grand Canyon is one of the most beautiful landmarks of USA, located in the state of Arizona. The massive landform is carved by the erosive action of mighty Colorado River and wind. The Grand Canyon is designated as one of the seven natural wonders of the world. The canyon is of massive size – 277 miles long, about 18 miles wide and is just over a mile deep.  It is being believed that carving of the Grand Canyon has been started some 17 million years ago.

Niagara Falls, another beautiful landmark of USA is one of the biggest waterfall with respect to the volume of water. This most visited falls are formed by melting of glaciers and water erosion some 12,000 years ago. It is being admired for its width, height and the water it dissipates per second. The falls shares a border with Canada with one-half of it is located in USA in the state of New York and other half is in Canada. It attracts approximately about 12 million visitors combining from both sites.

The Yellowstone National Park is the first national park in North America is located mainly in the state of Wyoming although it shares borders with Idaho and Montana. The park covers an area nearly 3,472 square miles and comprises of thousands of geysers, hot springs, canyons, rivers, lakes, and mountains. This beautiful landmark attracts 2 million visitors on an average annually.

It is one of most famous landmarks of the United States located in the state of South Dakota. It is better known as memorial for the past US presidents namely George Washington, Theodore Roosevelt, Thomas Jefferson, and Abraham Lincoln. It is a 60-foot granite sculpture, which was carved by Gutzon and Lincoln Borglum in between the years 1927 and 1941. This man made landmark attracts around 2 million visitors.

Golden Gate Bridge is most specifically known as the landmark of San Francisco. It stretches at the height of 1.7 miles from the waters of the San Francisco Bay. The bridge was completed in the year 1937. The color of the bridge amidst the green surrounding and above the misty water looks amazing.