Bhutan – A Paradise on Earth 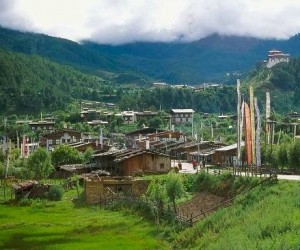 Bhutan, a paradise on earth is a small beautiful country in the eastern end of the Himalayas. The country shares its borders with India and China. It is also the only Vajrayana Buddhist nation of the world. Despite of its closest boundary with the big nations like India and China, Bhutan clearly distinguishes itself because of its strong culturral sense and tradition. Here the culture and traditions are well preserved for centuries. Bhutan is famously called as “The Last Shangrila” because of its pure environment and harmonius place. Bhutan is a unique country both culturally and environmentally. It is called as land of a “Thunder Dragon”. High in the Himalayas, it is the world’s last remaining Buddhist Kingdom. Here the sale of tobacco product is banned and smoking in public places are not allowed. Well, one more strange thing is that chillies are considered as vegetables and ema datshi is a popular national dish. It consists of chillies with Bhutanese cheese sauce.

The important places that you must visit on your trip to Bhutan are:

It is home to some of Bhutan’s oldest temples and monasteries. It is a beautiful valley covered by terraced farmland. It is also the only internationall airport of the country.

Drukgyal Dzong: The Drukgyal Dzong is located in Drukgyal in the upper Paro region. It was formerly built as the defence fortress. There are differences about who actually built Drugyal Dzong. Some writes that it was built by Zhabdrung Ngawang Namgyal who built it to commemwanted to mark his victory over the Tibetian army in the year 1649. While other belives that it was built by Tenzin Drugda and the Paro Penlop. It was used as a summer home by Ringpung Rabdey until 1951 when it went on fine .

Taksang Monastery: It means Tiger’s nest, well it was built around the cave. It was here where  Guru Padmasambava meditated in the eight century. It is a belief that Guru Rimpoche also landed here in a mirstrious way, flying on the back of a tigress. It is pilgrimage for the Bhutanese people but tourist also enjoy hiking up there and wnjoying the mystical beauty of this place and surroundings.   Ringpung Dzong : Thia Dzong was built in th eyear 1646. To get in to this Dzong in through tradional covered bridge and walking through it is very nice. It is now home to Paro Monastic body as well as the office of civil administration for the Paro valley. Tsechu festival also held here every year.

Ta – Dzong: It is a castle shaped Dzong located near the Ringpung Dzong on the hillside. It was built in the year 1651, it was then used as the watch tower. It is now established as National Museum and have collections of various paintings, arts, anf Relics.

Farm House: It is worth seeing the Bhutanese Farm house. Unlike others, these Bhutanes farmhouses are very colourful and decorative and they buit it in  a traditional style. It is normally 3 storied house in which on the ground floor they keep cattles, top one for drying hays and middle one to live in. Isn’t it sounds quite interesting.

Thimphu is the capital of Bhutan located at the elevation of 2300 meters. It is nothing like any modern capital cities of the world. The Tashichho Dzong is the secretariat building that houses the Throne room of the King as well as the Summer residence of the central Monk body.

Memorial Chorten: This is basically a monument which houses various paintings and rare images of the Buddhist philosphy. It was built in the year 1974 in the memory of the Third King Jigme Dorji Wangchuk. He was died in 1972.

Tashichho Dzong: The Dzong which was initially built in the 17th century, was rebuilt in early 1960s by third King, H.M. Jigme Dorji Wangchuk, as the permanent capital of Bhutan. The dzong houses as the main secretariat building and summer residence for the central monk body. This is opened to visitors only during the Thimphu festival and in winter when the Monk body shifts to Punakha.

Simtokha Dzong: This is built 6 Kms away from Thimphu in the year 1627. It is now the oldest Dzong which is now open as the school for Buddhist studies.

It was the former capital of Bhutan until the year 1955. It is just 75 km away from present capital Thimpu and takes about 3 hours to reach Punakha.

Wangdi Phodrang: The Wangdi Dzong built at the altitude of 1350 meters and is located south of Punakha. It was built by Shabdrung in the 17th century.

Chimi Lhakhang /Temple: It is also known as Chime Lhakhang or temple and is a Buddhist monastery in Punakha. It is located near Lobesa and was built in the year1499 by the 14th Drukpa hierarchy named Ngawang Choegyel.   Tongsa

Tongsa lies in the Himalayas on the Tongsa River at the altitude of 5,500 feet. It use to be headquarters of the first hereditary maharaja of Bhutan as well as the historic seat of power over central and eastern Bhutan. The scenery around Tongsa valley is spectacular.

Tongsa Dzong : It is built in the year 1648 as the ancestral home of the Bhutan’s Royal family. It is the largest Dzong fortress in Bhutan located in Tongsa.

Kuenga Rabten: It is a 23 km drive from Tongsa to Kuenga Rabten which takes around an hour and it passes through beautiful view high above the river gorge. The palace is quite visible from main road as you approaches Kuenga Rabten. It used to be the winter palace of the second King and currently it is look after by the National Commission for Cultural Affairs.

Chendbji Chorten: It is located at the altitude of 2430 meters 41 km west of Tongsa. Chendbji Chorten was built in the 19th century by a Tibetian Lama in order to cover the remains of the evil spirits who were killed there. It is also known as Chorten Charo Kasho.

This entry was posted in Trip Ideas and tagged Bhutan, Himalayas. Bookmark the permalink.