Most Spectacular Places on Earth 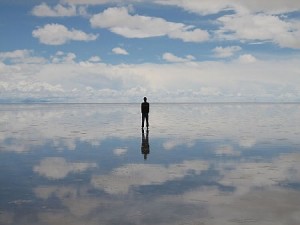 Salar de Uyuni is the largest salt flat in the world located in Bolivia, in South America. The large salts flat were formed due to the transformations of many lakes of the prehistoric times. The area is covered by salt crust for few meters which made this amazing flatness of the Salar. It is being estimated that it contains about 10 billion tons of salt which covered the whole 12,000 sq km of the area. It is indeed one of the very spectacular places on earth worth visiting once in a lifetime.

To reach Salar de Uyuni, you can take bus or train to the village of Uyuni. Tours run frequently from here.

It is the largest Marine Park of the world that stretches in just over 2300 km along the northeast coast of Australia. It is an extremely beautiful site with colorful corals of about 400 different types thrives here. There are about 1500 species of fishes in the reef. There are number of tours and services available that will take you for snorkeling and diving.

It is being said that the some parts of Atacama Desert of Chile have never received rainfall. The barren landscape of the Atacama Desert is made up of a series of salt basins. As a result of which there are no vegetation. The desert is covered in 600 miles in South America on the Pacific coast. It is here where you will find the extinct volcanoes in the Inca village.  The El Tatio Geysers are located at 4267m above the sea level and continuously blowing steam.

No doubt about the Grand Canyon being one of the most spectacular places on earth. It seems that the canyon is carved by the God Himself. Well, the whole carving is done by the mighty Colorado River which has been continuously carving the world famous Grand Canyon from 6 million years. It is located in the state of Arizona, USA. It expands in about 446km long. There are lots of viewpoints to see its grand view; the most popular is the Mather point. One of the most adventurous things to do here is hiking down to the Colorado River and do rafting.