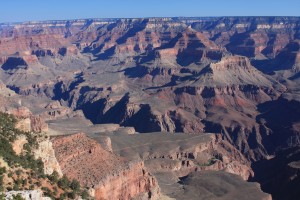 See how many prettiest places on our lists have you already visited? If not, why not adding few places from this lists in to your itineraries for your next dream vacation.

Where can you find such a magnificent natural formation on the earth other than the Grand Canyon? The Grand Canyon is one of the five natural wonders of the world. It is located in the state of Arizona, United States. The amazing views and depths of the canyon are beyond any comparison. The views of the sunrise and sunsets are spectacular when the sunlight falls on the canyon and it brightens up the whole canyon. One can easily spend whole day looking at it and get astonished as how wind and water can carve such a massive formation on earth. The trail in the Grand Canyon which goes down to the mighty Colorado river is very rigorous. One should have great stamina and physical health to attempt it. Rafting in the Colorado is a good adventure activity to do here. Day temperature of pick summer months are extremely high and nights are cooler, it is advisable not to hike during this time. Best times to hike are during March through May or September through November.

Well, it is just the monument, however the beauty of this monument is beyond any imagination. You can not feel the warmth and the grace of this beautiful monument without being going to the city of Agra in India where the Taj Mahal is located. Made out of a white marble and red sandstone, the whole monument sparkles like a diamond in the sunlight.  It is one of the very old monument from the 17th century which was made by the Mughal Emperor Shah Jahan in the memory of his beloved wife, Mumtaj Mahal. The best time to visit Taj Mahal is in between October to March. During this time the weather would little cooler and you can enjoy the beauty of its domes. minarets, and chambers by walking around. Looking at the Taj Mahal on the full moonlight is amazing. You have to see it to believe it.

The Great Barrier Reef of Australia is a well-known destination around the world. And it is indeed one of the prettiest places on our lists. This is the world largest coral reefs covering the area of 135,000 square miles. Whether you see it from up or go down in the region, it looks awesome. The place is worth a visit at least once in your lifetime. It looks amazing whether you see it from the surface, up from the air or from below when you dive in to the reef. It is surrounded by amazing beaches which enhances its beauty. There are over  2,900 beautiful coral reefs and millions marine life. Best time to visit this place is in between June through October.

The Plitvice Lakes National Park is one of the most stunning places to see on earth. This place is so pretty that you will never let your eyes to stop looking at them. This National Park is located in the Lika region of the Croatia in Southeast Europe. The beauty lies in its 16 bluish-green lakes, which are separated naturally by the dams on the Plitvice plateau. The lakes are naturally connected by the waterfalls; among them, the tallest waterfall is the Veliki Slap, which is 230 feet tall. Several flora and fauna surrounding this region added to the beauty of the 16 lakes. It is one of the most beautiful places to explore through walking, hiking and by boating. During the winter, the beauty of the region transforms with snow and ice.

It is a Buddhist Stupa believed to be from a Mahayana tradition and it is known as the world’s largest Buddhist monument of the world. It is located in the Indonesian island of Java. Borobudur was built in around 750 AD. It is huge temple in a three-dimensional structure consists of a visual depiction of a Buddhist teachings. The best time to visit Borobudur is in the month of May. The sunrise and sunset are the best time to see the spectacular views of the grand Stupa. It is one of the few places on the earth for the OMG moment.