Scariest Bridges of the World 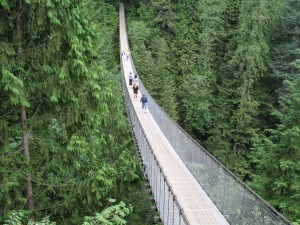 All bridges on earth are made for either useful purpose or for inspiring. But mostly it is made for an easier way to commute from one side to the other.  There are different types of bridges being made such as suspension bridge, rope bridge, etc.

Here are the lists of few scariest bridges on earth which will thrill your imagination.

Aiguille du Midi Bridge is located in the Mont Blanc massif near Chamonix, France. It is really unbelievable that one can build bridge at the place on such high and sharp mountains. But the Aiguille du Midi Bridge in France is built at this height that you have to hold your breath. No doubt it is one of the most amazing bridges of the world. Even the idea of building the bridge on the top of mountain is extremely ingenious.

Those who are afraid of heights don’t even get courage to see the bridge. You have to take a cable car to get there which climbs 9,200 feet in 20 minutes.

It is the highest suspension bridge of America. Indeed breathtaking but scariest for some. It is located over the Arkansas River near Canon city, Colorado. It is 1260 feet long. If you have a fear of height then look straight don’t look right or left or down until get the other side of the bridge.

Recently they have added the Royal Rush Skycoaster, which is known as the scariest sky coaster in the world. It is situated on the edge of the Royal Gorge and takes guests up to a 100 foot tower and then let them “swing” out on the side. You will hear the screaming of the guests.

Trift Bridge of Switzerland is one of the most magnificent suspension bridges built in the Alps. It is 100 meters in height and 170 meters in length. It is suspended on the region of the Trift Glacier. You can reach the bridge through the gorge by a cable car.  It is the longest and the highest pedestrian suspension bridge. It was built in the year 2004 to make hikers reconnect to a hut which became inaccessible because of the retreating Trift glacier.

Carrick-a-Rede offers an exciting rope bridge experience to its guests. This rope bridge was initially consists of a single rope hand rail only which was later replaced by two hand railed bridge by the National Trust.  The bridge is 65 feet long and about 100 feet above the rocks below. No doubt the area consists of an excellent natural beauty.

Capilano Suspension Bridge is located in North Vancouver, Canada. Bridge was originally built in the year 1889. The bridge is 450 feet long and 230 feet high. This footbridge is surrounded by lush green forest. It is built very high, and narrow, and it is extremely shaky as walk down to cross the bridge.