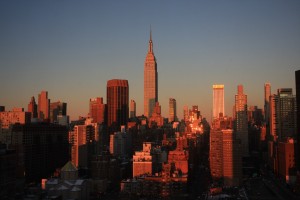 New York City is also ranked as the No.1 city in the world to visit in the year 2011 by the Lonely Planet Best Travel 2011. Post 9/11, the World Trade Center’s site was almost out of the view but from this year it is being changing. In 2011, finally the site of the former WTC building reopens for the public as the National September 11 Memorial. It is a 6-acre area filled with tree plaza with 30ft-deep waterfalls right at the footprint where the towers stood in the past and is engraved by the name of each victim. It will be lighted at night. By 2012 there will be a museum at this site.

The city is also going through a revival of half of the Times Square’s roads which will be given over to the pedestrians. Also the 85-acre Brooklyn Bridge Park has been transforming the old piers into the parks and apartments. And the Brooklyn’s Coney Island is going to completes its much awaited $30 million renovation in the summer of 2011.

Never seen the natural art of rock formations? If not, you better visit the southern Utah to find how mother nature has  done such an amazing rock formations and a colored landscape to this part of the world. It is one of the mesmerizing site of the world. Why you should go in 2011? The answer is if you have watched the recent movie of Danny Boyle “127 Hours”, your trip to this region will add a new excitement and love with this land. But you better be not going alone while hiking.

Take part in ‘Big Fun in Big Bend’, a favorite road trips which will start in Fort Davis and will wind up in the McDonald Observatory for the outdoor Star Party. If you are going there during the early November, do not forget to check out the Terlingua International Chili Championship. This championship attracts about 5000 spicy food fans every year to this little town of 300.

April 2011 is the 150th anniversary of the US Civil War. Although warfare started in South Carolina, Savannah was the final goal of the General Sherman’s army. Savannah is extremely beautiful place. Here the trees are covered in Spanish moss which makes it more captivated.

2011 is the 150th anniversary of the Colorado Territory. The Colorado Gold Rush was started in the year 1861 and it brought with it invasion of settlers into this area. Colorado is now best known for the best skiing destination in the country. There are more than 26 resorts which includes the first ski-in/ski-out ballroom of the country at the Viceroy Snowmass.

The Grand Canyon is among the 7 natural wonders of the world. It is a gigantic gorge located in Arizona, created by the Colorado River. The Grand Canyon National Park is one of the most visited national park in America, around 5 million visitor come to this destination every year. There are two rim of the Gran Canyon – South Rim which is more popular and accessible thoroughtout the year whereas the North Rim is quieter and slightly less accesible – both the rims have there own beauty and charm and provide breathtaking view of the canyon.

They celebrate the Palm Springs’ annual Modernism Week. There are events taking place all over the city celebrating the mid-century: clothes, architecture, cars, music, food. Don’t miss it this year.

Hawaii is a paradise. Seems to be bit pricey, not too pricey if compared with other South Pacific destinations. The year 2011 marks the 70th anniversary of the Pearl Harbor.