Top 5 Places to Visit in Turkey 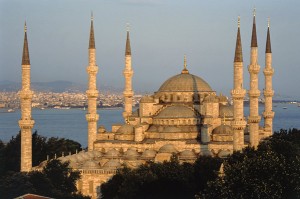 Turkey can be best described as the country where east meets west. It offers one of the most diverse landscapes with soaring mountains, plains, deserts, orchards, ocean and beaches, and high towering cliffs. Country is rich in intricate architecture, culture and art as there have seen so many civilizations which have been living in the country from ages. Turkey is one of the favorite destinations among the tourist all over the world.

Are you planning a visit to this beautiful country? Here are our top 5 picks of the places that you must visit in Turkey:

Istanbul is one of the most culturally advanced cities with a fabulous nightlife. It is a must-see city on a trip to Turkey. It is the only city of the world which is extended in between two continents. It is one of the busiest cosmopolitan cities. It was founded by the Emperor Constantine in 326 AD. The lively Istanbul is full of architecturally beautiful churches, mosques, museums and wonderful palaces, busy bazaars and exciting streets. The major attractions of Istanbul includes Topkapi, it is a luxurious palace of the Ottoman sultans which offers a great view of the Sea of Marmara and the Bosphorus; then there is a beautiful Blue Mosque, it is the only mosque which has 6 minarets; the huge dome of Aya Sophia, it was built in 536 as a Byzantine cathedral, later it became as mosque and now it is a museum. The Grand Bazaar located in the heart of the city is one of the most popular places to visit. It is bustled with large number of shoppers.

It is the place where a narrow strait divides two continents, Europe and Asia. There are 2 big suspension bridges which extend to these overcrowded waters. This place attracts large number of tourists as there are ferries, tour boats and from where you can see the Istanbul skyline. Places to visit in Bosphorus are the Sultans’ 19th-century Dolmabahçe Palace, Uskudar on the Asian shores, Beylerbeyi, a summer palace of Ottomans; and a 19th century beautiful villages loaded with fish restaurants and old mansions. There are number of castles by Byzantine and Ottoman along the coasts including Anadoluhisar and Rumelihisar.

3. The Sea of Marmara

The Sea of Marmara is located west of Istanbul. It is the provinces of Thrace and Marmara which cuddles the Sea of Marmara. Gelibolu and Çanakkale towns are the entrances to the Dardanelles, which is a narrow strait hat leads to the Mediterranean. You can see wonderful architectures in the old historic cities of Thrace and Bursa. The architecture like Selimiye Camii in Edirne, which is a masterpiece of the Turkish imperial architect, Mimar Sinan is worth visiting.  The Uludag National Park, located just outside of Bursa is a beautiful mountain reserve, which offers a great site for hiking in summer and skiing in winter. If you go just little south of Gallipoli, you will find the ruins of the famous ancient Troy.

The Aegean Coast offers beautiful beaches and numerous historical sites. The towns of Ayvacik, Ayvalik and Behramkale attract huge number of visitors. These are towns from where travelers visit the magnificent Temple of Athena at Assos. Towards south, lie the ruins of the great city of Pergamum, the modern day Bergama. Here you will also find the Sanctuary of Asclepieion and temples of the Acropolis and the red-brick Basilica. Also lies on the Aegean coast, the city of Izmir, which is the birthplace of Home. It is also one of the important port cities in Turkey. There are few well-preserved porticos and Statues of Poseidon and Artemis.

Lies here is one of the most amazing archeological sites of the world.  This includes the Grand Theater; where the St Paul preached Ephesians, the 2nd century Temple of Serapi, the graceful Temple of Hadrian and the Library of Celsus. There is a site of Meryemana, which is said to be the house of the Virgin Mary.

Beautiful weather with wonderful coastline on the coast of western Mediterranean is a popular holiday destination. It is also a place for important archaeological sites and castles. Antalya is a beautiful beach town surrounded by famous resorts, picturesque town and harbor. Kaleiçi, Kesik Minare, Yivli Minare mosques, and Hidirlik Kulesi, are some of the sites you should not miss. Perge is a well-preserved place which has tall Hellenistic walls and streets that still have the chariot wheels; and Aspendos, which is a remarkable second-century AD amphitheater.

The town of Alanya on the Mediterranean coast offers some of the finest beaches and beautiful beach resorts. Also worth visiting is the wealthy city of Adana, which lies in the middle of the Cukurova plain, and is well known for its cotton industry.